Where were you when 9/11 happened? How things had changed since then. 13 years had passed. America has wake up. Why I said America has wake up? Do you know many American people don't know much about outside world apart from their own country America. Can't blame them. They already have all what they need to have. America is an economy power house of the world. If you have a chance to be there, you will surely get fresh air of things which you probably would not able to get here. I compare China and America, I still hold America much better than the former, culturally, economically and politically. We all know what is free world means but we could only appreciate the real meaning until you see the free world through the eye of America. You have to be there to see it and feel it and not just by reading about it.

Below are tweets from someone who used to stand beside the US President and now tell account by account on how they deal with the 911 incident. How often could you get that. 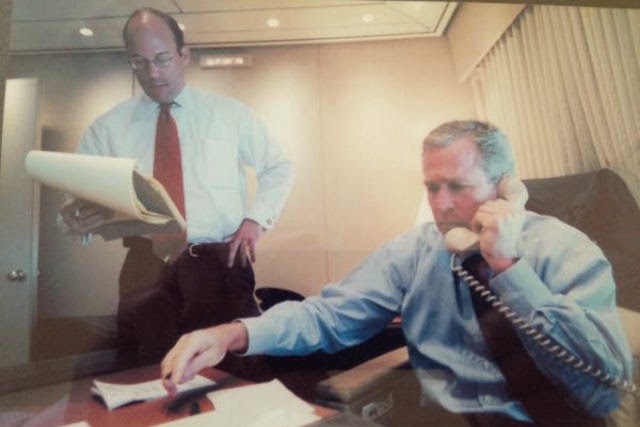 
Ari Fleischer, the former White House press secretary who was with President George W. Bush on Sept. 11, 2001, took to Twitter on Thursday to offer his recollections of the 9/11 attacks in real time.
Through a series of diary-like tweets taken from his notes from that day, Fleischer offers a vivid account of the events of 9/11 as seen through the eyes of one of the president's trusted advisers.

"What happened that day should be shared so it is never forgotten," he told Yahoo News. "Letting people see what happened on the inside just feels like the right thing to do on a day like this." 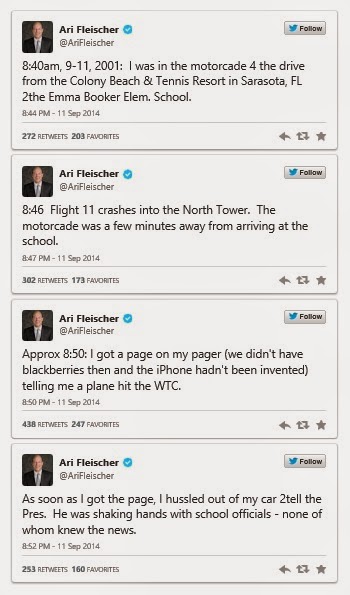 But Fleischer, who served as press secretary from 2001 to 2003, says Karl Rove informed Bush of what was believed to be an accident. Then the second plane hit.

Fleischer, who now runs a sports communications firm, recalled that Bush wanted to address the press, but that Fleischer advised him against it. 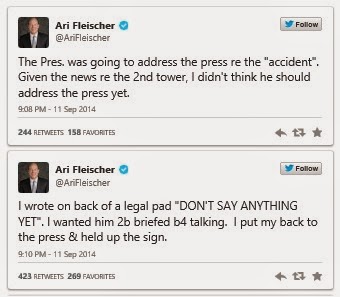 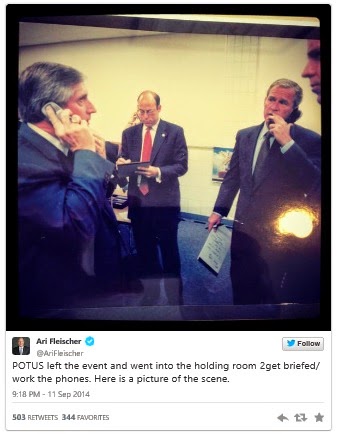 At 9:45 a.m., they boarded Air Force One. Years later, Fleischer writes, Capt. Mark Tillman told him they took off at an "unusually steep ascent because he had a report of a sniper at end of runway."

They flew to Barksdale Air Force Base in Louisiana, instead. 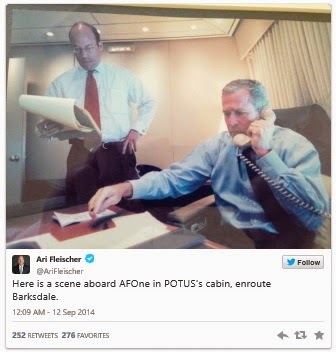 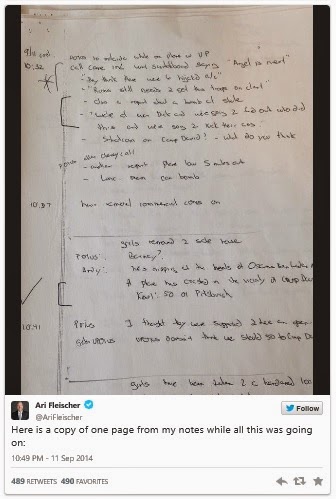 Hearing Bush's declaration of war is Fleischer's most vivid memory of 9/11.

"To hear the commander in chief say that sends a shiver down your spine," Fleischer told Yahoo News.

At Barksdale, Bush addressed the nation.

They left Barksdale for Offut Air Force Base in Nebraska, "a secure location where Bush could convene a meeting of the National Security Council." 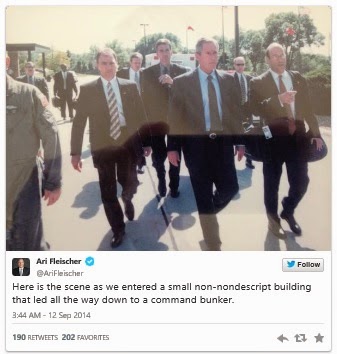 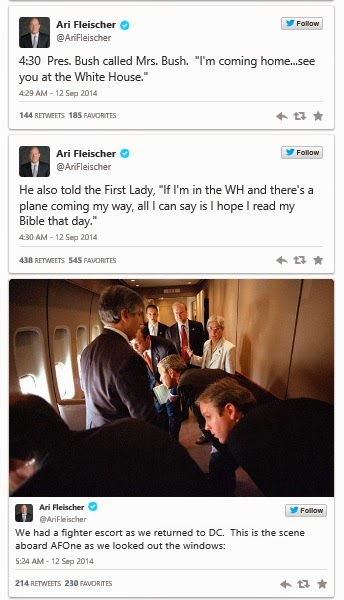 Fleischer says that had Twitter existed on 9/11, he would not have used it.


"I'm thankful Twitter didn't exist then," he said. "I wouldn't have tweeted, but it likely would have spread bad rumours — and there was a lot of false information flying that day."


Would it have changed the way the administration responded to the attacks?


"[We] would have had to respond to every false rumour that circulated, and many horrific accounts would have come out from inside burning buildings," Fleischer said. "You can't stop technology, but as much as I am a fan of Twitter, I'm glad it didn't exist on September 11, 2001."