The time has come

Everything has its first time and everything has its end too. But most important, a new beginning has been chartered for more better things to come. With that, trust him we must. We stand-by to support him.

The staffs organised a farewell party in his honour last weekend. It was a very emotional day not only for the man himself but also for the staffs. The feeling was so genuine that I can see through their eyes and actions how much they loved him as their boss, mentor and leader. He has given many opportunities to his staffs and many of them are millionaire now simply because he believes everyone has to grow together. How could you describe a man that willing to nurture his personal driver to become one of his right-hand man helping to run the company. How many will there be in this part of the world that you could find such a boss. He has done his best and he has meticulously ensure the succession plans are in place. The staffs will going to miss the man even more come 01.05.2014.


I give you a bow with respect, Kee Sin.

To you, it is Bye-bye SPSetia, Hello Ecoworld. 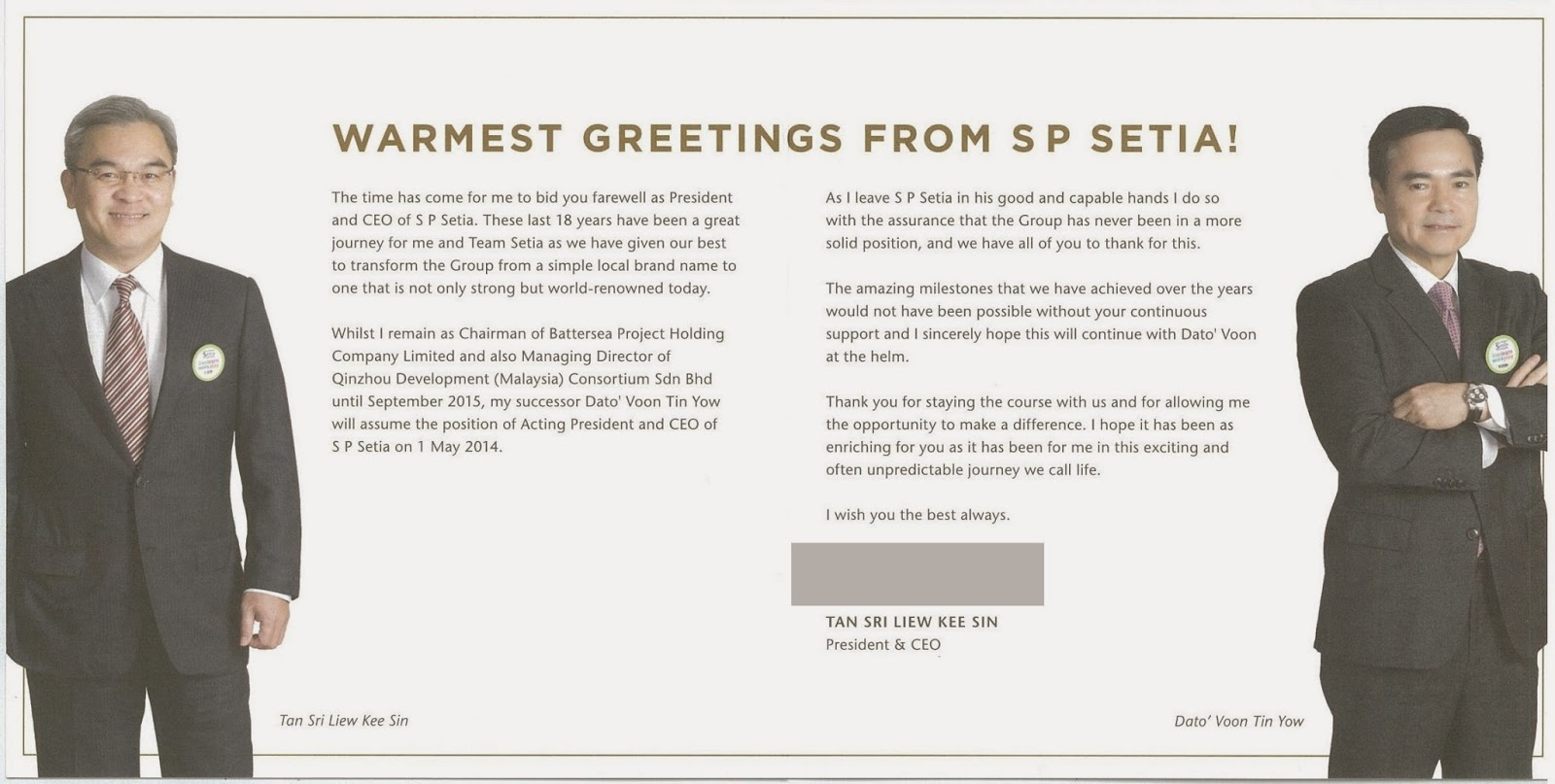 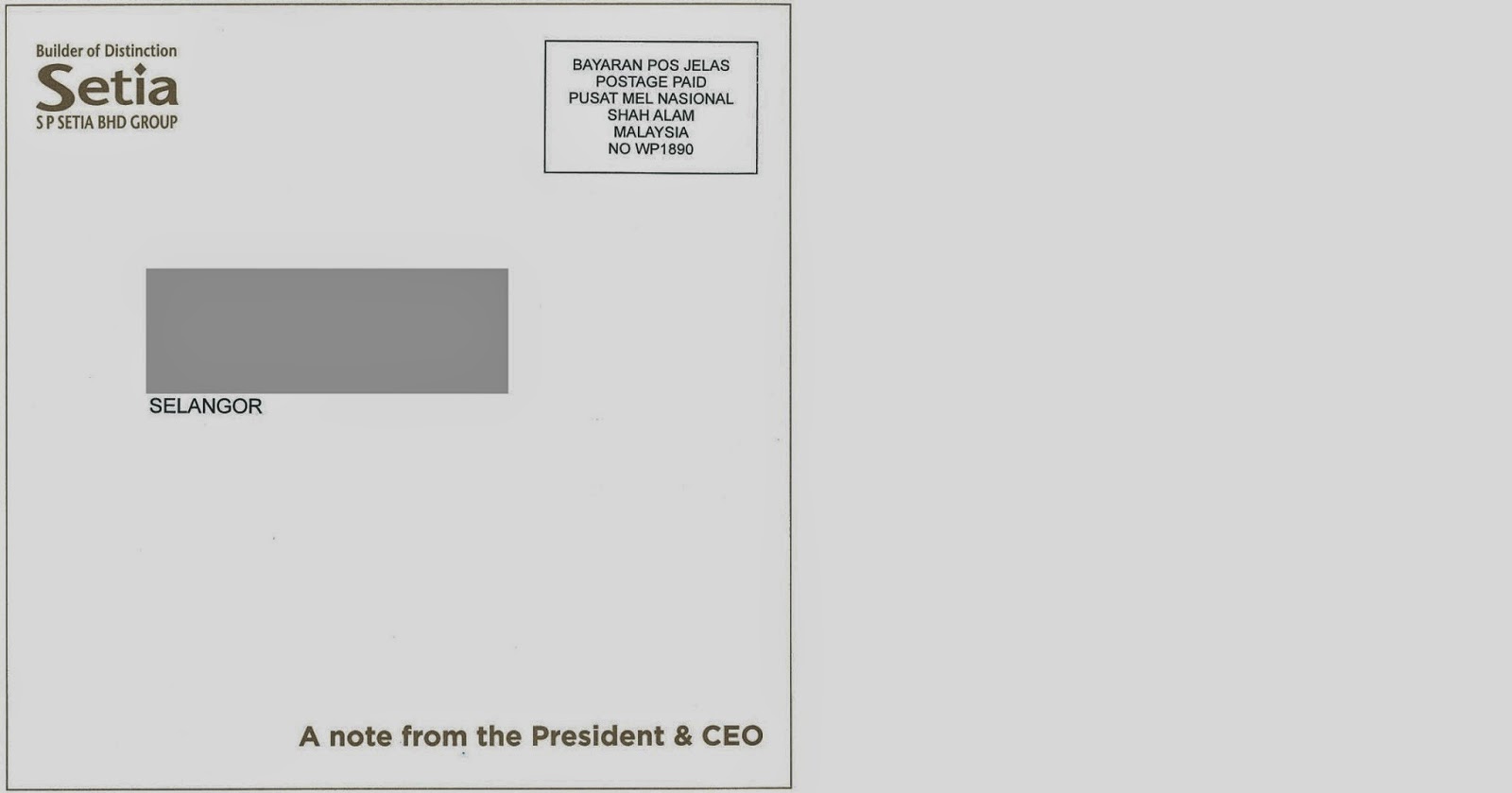 The disposal coincides with Liew’s upcoming last day in S P Setia, which will be on April 30.
Stock market data showed the 2.76% stake in the property development company was traded off-market at RM3.95 a share. S P Setia ended the day one sen lower at RM2.91 on a value of 288,000 shares.

Last month, Liew had exercised his option to sell the remaining 67.79 million shares he held in the company to Permodalan Nasional Bhd (PNB).


In a filing with Bursa Malaysia on March 21, S P Setia said it had received a notice from Liew about exercising the shares under the put option dated Jan 20, 2012, requiring PNB to purchase from him 67.8 million shares, or three-sevenths of the shares he had held then.

S P Setia’s current deputy president and chief operating officer Datuk Voon Tin Yow will assume the post of acting president and CEO from May 1, 2014 to April 20, 2015, upon Liew’s exit.
There has been talk that Liew’s departure from S P Setia could pave the way for PNB, which owns a 64.13% stake in the company, to inject more property assets into S P Setia.

These would include PNB’s property assets held under Sime Darby Bhd and I&P Group Sdn Bhd.
PNB is also said to be looking for a successor to drive S P Setia forward.

There has also been much talk about Liew joining his son, Tian Xiong, who owns the majority shares in Eco World Development Group Bhd. Liew has so far kept mum on the subject.

Eco World is a relatively new property company that is headed by former S P Setia lieutenants.
Liew will remain chairman of Battersea Project Holding Co Ltd (BPHC) until September 2015. The £8bil (RM43.96bil) Battersea project is slated for completion in 2022.

BPHC is controlled by S P Setia and Sime Darby Bhd, with a 40% stake each, and the Employees Provident Fund with 20%.


SP Setia said on Wednesday Liew had transferred the shares, representing a 2.75% stake, to Permodalan Nasional Bhd on Tuesday.

The transfer of the shares at RM3.95 each was pursuant to the exercise of three seventh of the S P Setia shares under the put option in the management agreement dated Jan 20, 2012.

StarBiz reported the block of shares was transferred at RM3.95 at midday on Tuesday, which was RM1.03 above the market price of RM2.92 then.